Megalithic art can be best described as paintings or carvings found in the structural elements, like the kerbstones, orthostats or capstones of megalithic tombs. Shee Twohig [SheeTwohig81] lists 39 sites in France, most are concentrated in Brittany. Other important sites with megalithic art can be found in Iberia, Britain, Ireland and Germany.

Passage tombs were built in Brittany as early as 4675 BC. The Kercado tomb near Carnac is one of the oldest known. It has a clear layout: A long passage (6.5 m) leads to a rectangular chamber. In later monuments variations and additional features were added. 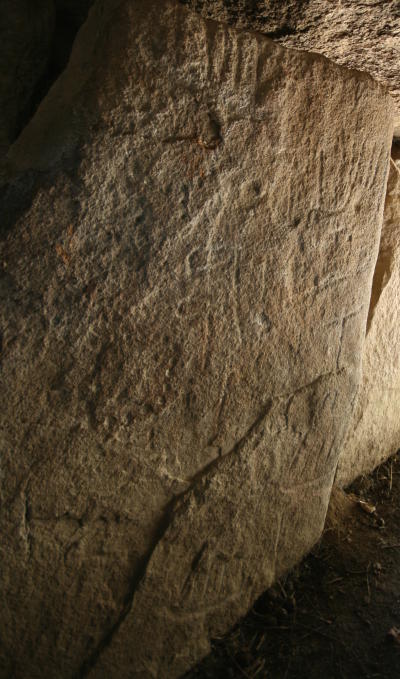 With the modification of the tombs the megalithic art underwent development too. In the oldest monuments simple symbols like axes, yokes and crooks are found. In the second half of the 5th millennium BC motifs became more developed (compare [Burl85]).

A number of motives appear on carved slabs that were used as stelae. Some seem to be still in place now as orthostats of tombs. Examples are the back stone of the Table des Marchants or Mane Lud in Locmariaquer.

Others were re-used as capstones. Examples include the capstone of the Kercado tomb, Mane Rutual and again the Table des Marchants. The latter one was once part of 10 m tall stele that was broken, intentionally or not into pieces. The upper bit was found 4 km away, across a river in the Gavrinis tomb (now on an island). The carvings of this piece were placed upright and could not been seen in the tomb.

There is further proof of the re-use of decorated slabs. For example in Le Petit-Mont in Azon: The orthostat C2 of Cairn II seems to be a ‘modified’ stele. The ‘head’ of a buckler motif was removed and the stone is positioned upside down. Floorstones in Mane Lud and Petit-Mont were also identified as re-used stelae. It seems to be likely that other carved capstones and some orthostats were re-used stelae. Examples include amongst the already mentioned Ile Longue, Dissinac and Barnez.

Further it is argued that many stones might have been painted. This is suggested because many menhirs have plain surfaces that might have been a preparation for paintings on this surface. Apparently no paintings survived in the climate of Brittany, but paintings are known from megalithic buildings on the Iberian Peninsula.

In 4th millennium elaborated figurines appeared. These can be found in the angled passage tombs of the Carnac area in Morbihan. Examples of angle passage tombs are Goërem, Luffang, Le Rocher and Les Pierres-Plats. 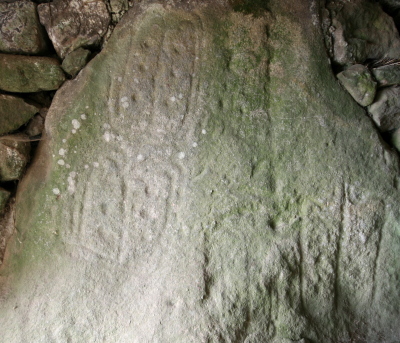 Figurines in the Pierres-Plats tomb

Figurine in the Pierres-Plats tomb

The carvings in angle passage tombs are often interpreted as anthromorphic representations of a female goddess.

In Later Neolithic (around 3000 BC) allées-couvertes were build in parts of Brittany. Some of these show depictions of breasts in relief. In the same period also axes in relief (e.g in Gavrinis) were produced. 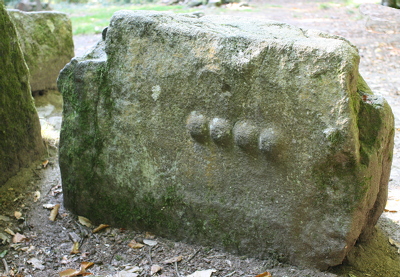 Breast carvings in the Tressé allées-couverte